Rare Coven & Circle Mystical Items
Each item on this page came from a Coven or Circle and was used as part of their decor and rituals.

Hermes, Messenger of the Gods and Greek God of Commerce 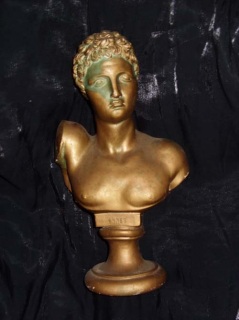 $
100.00
Bust of Hermes, Bust measures 13 inches tall and 8 inches across the shoulders. Made of chalk about 1950.  His plaque reads ERMES. he is best known as the messenger of the Gods. Hermes was tasked with carrying the dead to the underworld as well. he is God of commerce and one of the helpful Gods of the Greek pantheon. Hermes is called Psychopompos (Herdsman of the dead or guider of souls), messenger, patron of travelers and athletics, bringer of sleep and dreams, thief, trickster. Hermes is a god of commerce and music.  Hermes is the father of Pan and Autolycus.
Large Limited edition Pewter, Gold Dragon from Danbury Mint 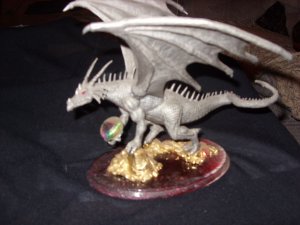 $
275.00
Beautiful Pewter Dragon sitting on a gold plated mountain holding a crystal. Limited and very rare from Danbury Mint. Dragon measures 12 " from front to tail and stands 8" tall. Unimaginable detail, complete with marble base to sit it on., Great 1990's art from Danbury Mint.
Leopard Limited Edition Figurine from House of Erte Collection 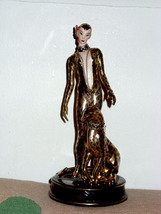 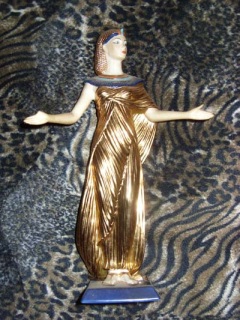 $
239.00
Beautiful Limited edition Statue of Selket, Egyptian Goddess of magic. The only flaw is a thumb. Created by the Franklin Mint, Fine Porcelain.  She is 10" Tall.
Authentic Alligator Head, Representing the Egyptian God Sobek

$
100.00
Sobek, God of war and controlling God of the Ancient Nile.Sobek is a fourfold deity. He represented the four elemental gods, Ra of fire, Shu of air,Geb of earth, and Osiris of water. A crocodile, a man with the head of a crocodile, or a mummified crocodile are used as representations for Sobek.. This unique piece measures 8 inches long and is at least 45 years old.
Anubis Statue "Egyptian God and Protector of the Dead 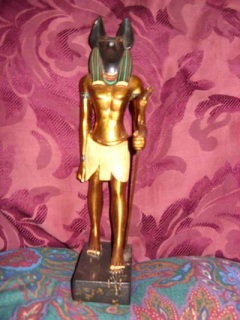 $
249.00
Anubis, who the ancient Egyptians called Ienpw (phonetically "Yinepu"), is the mysterious canid funerary deity of ancient Egypt. Even the meaning of his name is unknown -- speculations range from "Royal Child" to having derived from the world for "to putrefy". Both certainly fit the deity, who was at various points in time of Egyptian history known as the lord of the dead before Osiris and, later, became popularly known as the son of Osiris.


Statue was made by Artisans Guild as part of the reproductions of King tuts Tomb. Made of a heavy marble resin and then hand layered and painted in 24kt Gold. Measures 11 inches tall,  Base is 4 x 2. Solid piece.
Adramelech (Original Painting) Demonology by Melissa E Anderson 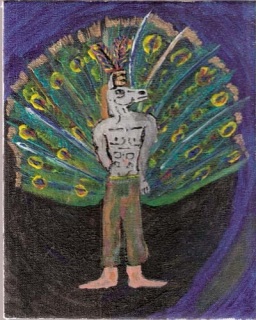 The Painting Subject: demons and demonology.  Adramelech (also Adrammalech) appears in the Old Testament only twice. The first time, he is mentioned as a son of the Assyrian King Sennacharib along with Sharezer, who murdered their father while he was worshiping in the temple of his idol, Nisrach (2 Kings 19:36-38 cf. Isaiah 37:37-39). The second time Adramelech is mentioned is in the context of a Samarian sun god who was worshipped by the Sepharvites. Adramelech in Demonology According to Gustav Davidson, Adramelech, which means, “king of fire” is one of two throne angels along with Asmadai.

Other items of Interest, Rare Books, Collectibles and more..
Powered by